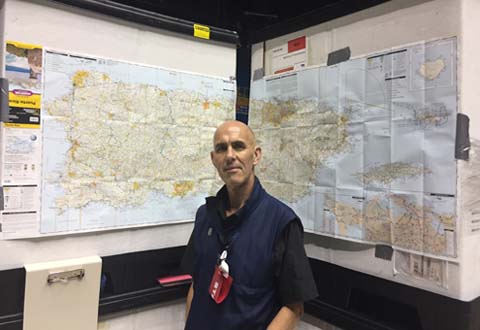 By Claudie Benjamin
Monday, December 4, 2017
Humanitarian teams arrived from around the world to assist the millions who were without electricity and potable water in the weeks that followed the devastation of Hurricane Maria in Puerto Rico. Dr. Patrick Malloy, Executive Chief of Staff, VA NY Harbor Healthcare System, was deployed October 13-27. He was among many other specially trained responders who volunteered to support the on-the-ground need for medical care provided to Veterans and others.
An Interventional Radiologist, Dr. Malloy knew that his highly specialized procedural expertise was less likely to be in demand than his administrative and organizational skills. His charge was to coordinate the efforts of hundreds of clinical providers coming from outside the island with those of Puerto Rican-based providers who were working tirelessly at local hospitals.
The two local hospitals in Manati were functioning to a large degree, relying on intermittently failing emergency generators. The hospitals were at capacity and were experiencing 4-6 hour waiting times in their emergency departments. One of the biggest challenges of the local healthcare system was to establish a safe place to discharge patients.
The majority of chronic care, elderly and disabled patients in Puerto Rico are cared for at home by family members. This includes people who use feeding tubes, are on home ventilators, and those requiring C-Pap equipment and those on Oxygen as well as hospice patients. As many homes were destroyed in the hurricane and without electricity or potable water, home care for many was no longer an option.
The mission of the Federal Medical Shelter was to provide shelter for these chronic care and disabled patients to offload the census at the local hospitals , as well as to provide urgent and emergency care. This temporary hospital was set up in a basketball arena in Manati, 90 minutes from San Juan, capital of Puerto Rico.
The conditions were austere. The outside temperature was typically above 90 degrees Fahrenheit. Inside the arena/hospital, air-conditioning was variable, sometimes even too cold. When generators failed, the inside temperature quickly rose. Bottled water was at times in short supply. At one point both patients and staff drank military stock “blue can” water. The clinicians slept on cots in the makeshift hospital/shelter. A 7pm-7am curfew was established to ensure safety and food was brought in. Clinicians used outdoor showers.
Communications were spotty, but they had some use of a satellite phone. Like many other disaster responders, Dr. Malloy didn’t speak Spanish. “But, we had round-the clock college-age interpreters coordinated by the Mayor’s Office,” he said.
Dr. Malloy was among the second wave of clinical staff sent over to relieve the first group of humanitarian responders. Dr. Malloy headed a group of medical specialists from the VHA that worked seamlessly with healthcare providers from the Disaster Medical Assistance Team (DMAT) and NY Presbyterian Hospital , which including physicians, ED nurses, pharmacists, respiratory therapists and social workers, as well as logistics staff, IT staff, electricians, nutritionists and support staff. The team set up a fast track urgent and emergency care clinic as well as inpatient capacity for up to 100 patients.
At the hospital shelter, Dr. Malloy said about 220 patients were seen every day. There was a fully functional Pharmacy as well as a point-of-care laboratory . “Social Workers were a major part of our teams,” said Dr. Malloy. He explained the essential reliance on social workers for coordinating activities between patients, families, local hospitals and the temporary hospital/shelter. Most patients did impressively well. When a hospice patient passed away, the response team participated in a Corridor of Honor, a moving experience that , “no one will forget,” said Dr. Malloy.
Dr. Malloy said the team from the VHA was top notch and the emergency response brought out the best in everyone. All those who wholeheartedly worked together to respond will always remember how they came together to serve those who needed their care.
return to top