VA Employees Deploy to Help Out Other VAs 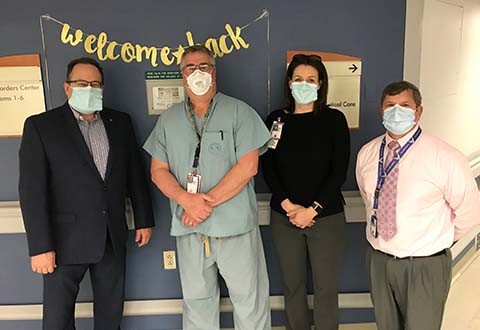 VA Employees Deploy to Help Out Other VAs

Over the last few weeks, several VA Western New York Healthcare System (VA WNYHS) staff have deployed to New York City in support of the Veterans Health Administration’s (VHA) commitment to Veterans within Veterans Integrated Service Network (VISN) - 2, which includes the hardest hit states of the COVID-19 pandemic, New York and New Jersey. VA and other federal partners such as FEMA (Federal Emergency Management Agency) can efficiently and seamlessly move staff and logistical support like ventilators and personal protective equipment (PPE) to where it’s needed most. And while equipment is necessary for the difficult fight against COVID-19, the response from staff at VA WNYHS has been both humbling and nothing short of heroic. Respiratory Therapist Jim Ryan returned this week Wednesday said, “it felt good to help out,” while five nurses, Jennifer Simmance, Holly Lezynski, Lou Pullano, Diane DiFrancesco, and Jessica Morrell, will also return on Sunday from their 2-week deployment.

Leading the group of VA nurses is Diane DiFrancesco who has 30 years of nursing experience and served in the Air Force Reserve as a commander of an air evacuation squadron. The former Colonel said that “if her family needed a critical care nurse, it’s our duty to take care of the sick.” When asked what her family said about her assignment to NYC, she said “they don’t have to agree with me, I just asked they support my decision.” When speaking with Diane during her departure from Buffalo last week, her no-nonsense leadership style and force of will, stood out.

Along with Diane is RN Holly Lezynski, who has worked at VA for almost 12 years. She currently works in Buffalo’s PACU (Patient Aligned Care Unit) but has ICU (Intensive Care Unit) experience too. As a nurse for over 25 years and a single mother of five with ages ranging from 14-24 years old, she said she truly loves taking care of Veterans and loves VA. “This is a historical time and great opportunity to use my skills that are much needed at this time. It’s a great risk, but I feel I need to go and would regret forever not going and helping.” RN Lou Pullano, also a Veteran and a recent recipient of the DAISY Award for outstanding national level nursing excellence, offered a shorter but on point response, “I just want to go there and help out.” Jennifer Simmance and Jessica Morell echoed similar sentiments of commitment and courage.