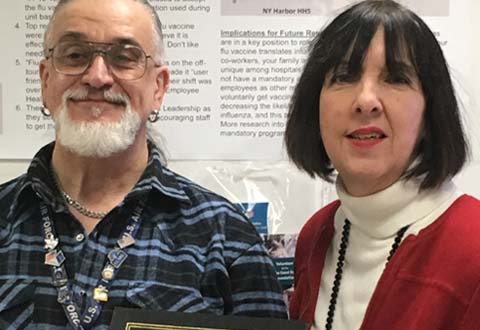 Paul Makarenko with Martina Parauda, Director VA New York Harbor Healthcare System, who is presenting him with January Employee of the Month certificate for the Manhattan Campus.

A life of “War and Peace” is how retired Air Force Veteran Paul Makarenko describes his life. Mr. Makarenko is referring both to his military service and to tumultuous emotional experiences and a difficult post-retirement job history. All these experiences come together in his role as Peer Specialist on the acute in-patient Mental Health and Substance Abuse units, where he assists other Veterans in their recovery journey. “ I don’t always know whether I’m making a difference or not.” says Mr. Makarenko.

“But, when you’re sowing seeds, you don’t necessarily know which ones will take root and grow.” He knows it’s meaningful to help even just one person, and he’s helped many more. Linda Kaplan, RN, PCTC, Mr. Makarenko’s supervisor, described his involvement with a patient who had several admissions and was not able to sustain recovery after discharge.

“Mr. Makarenko would spend time on the unit just listening to the patient. He encouraged the Veteran to attend his groups including Wellness Recovery Plan (WRAP), Goal-setting, and Anger Management and stigma reduction sessions). Mr. Makarenko met with the Interdisciplinary Treatment Team, and suggested this patient would benefit from a referral to a 21 day inpatient substance abuse program at VA’s Brooklyn Campus.

Mr. Makarenko and the Social Worker spoke to the patient about his discharge plans.  The patient agreed and a referral was made. On the day of discharge, the patient expressed ambivalence about going on for further treatment and said he was just going to leave and live on the streets. Mr. Makarenko helped the Veteran understand the benefits of continuing to engage in his recovery.

While escorting the Veteran to Brooklyn, Mr. Makarenko reminded him of his own recovery struggles and encouraged him to stay the course. On being successfully discharged from the program, the Veteran called Mr. Makarenko to tell him that he was going on to further treatment at the St. Albans Domiciliary Program. “ That Veteran has now completed VANY Harbor’s Compensated Work Therapy (CWT) program, is gainfully employed and living in his own apartment, thanks to the HUD-VASH program.” ,says Kaplan. “ This patient is truly a success story.”

Mr. Makarenko considers being able to make a difference in fellow Veterans’ lives one of the most rewarding achievements of his life. At 20, he enlisted in the Air Force after encountering a recruiter by chance while accompanying a friend. He was trained in computers once he entered the Air Force and worked in this area for 20 years until he retired. Being a part of the US Air Force during the Cold War until the dissolution of the former Soviet Union was important to him because his parents had suffered oppression under the Communist regime and were grateful for the liberties they enjoyed when they emigrated to the United States. “It was very meaningful for me to be there at that time, tied with NATO. Tied to history and my family’s life. I felt that it was the best way to say thank you to the country that had given my family a home.”

His most challenging times in the service include being the NCOIC of the Base Communications Center while stationed at McGuire Air Force Base in New Jersey during Desert Storm. He was responsible for processing all of the battle orders for the air campaign during the conflict. Also, while stationed at Rhein Main AB in W. Germany in October of 1983, 241 marines, sailors and soldiers died during an attack on their barracks in Beirut, Lebanon. Mr. Makarenko and many other airmen volunteered to assist in the return of their remains to their families.

Mr. Makarenko’s transition to retirement was very problematic. He struggled with substance abuse and was hired and fired from a variety of jobs. He became homeless and lived out of his truck for a year. His older brother, who lived here in NYC, took him in off the street in 2011. But, after several very patient years,  his brother cautioned Mr. Makarenko that unless he started doing something to improve his life, he would have to leave. The collapse of his second marriage and alienation from his two sons was wreaking havoc. He was angry and suffering from depression and anxiety. “Everything was falling apart,” he says. But, he found the strength to seek help. Initially he went to a Veterans Center located at the NYC Mid-Manhattan Library.

Then, a referral from NYU’s Military Family Clinic brought him to VA for the first time. He completed the SARP program, liberating himself from substance abuse and gaining appreciation for the value of having the support of fellow Veterans. While engaged in the CWT program, fellow Veterans Peter Henry and Anthony Stamatouras, who are themselves Peer Specialists, connected him with John Tatarakis,MPH, MS, RN, PMHCNS-BC, who supervises Peer Specialists.

The timing was right. Mr. Makarenko applied online via USAJobs and was hired for the position he holds today. “”It’s very difficult, but gives me tremendous satisfaction,” says Mr. Makarenko. Today, he lives in Bayonne, New Jersey. Not a bad commute to work at VA’s Manhattan Campus and close enough to where his sons live to enjoy an easy, comfortable relationship with them.