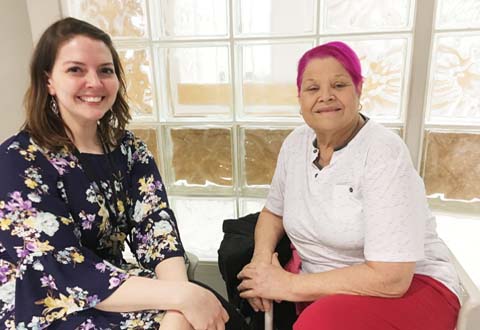 Multitaskers of the Body

"Hopefully my son's kidney will be a match with mine. But, no matter what, I appreciate his gesture. It's something beautiful," said Navy Veteran Carmen Martinez, hemodialysis patient at VA's Manhattan Campus.

Martinez served in the military from 1973-1977. She deployed to the Philippines, Italy, England, and Newport, Rhode Island in the US. Born in Puerto Rico, she moved at the age of 12 to New York City, which she considers her home. She currently resides in Williamsburg. She attended CUNY's John Jay College of Criminal Justice using the GI Bill and received an Associate's degree in Administration and Planning. Martinez worked as a direct care counselor for the mentally impaired prior to starting her hemodialysis treatment. Her cooking and baking skills are legendary, and she aspires to be well enough sometime to start her own small catering business.

Martinez discovered she had kidney disease two years ago when she went to see her doctor for severe cold symptoms. Instead she was diagnosed with Chronic Kidney Disease (CKD). Her disease continued to advance but she managed to avoid needing dialysis until June 2017, when she began hemodialysis treatment. After starting hemodialysis , she regularly consulted with Katherine Dressel, MS, RD, CSR, CDN, about nutrition for hemodialysis patients. The Veteran and the Clinical Dietitian had already met while Martinez was being treated for pre-diabetes. The two formed a special bond that is easy to understand observing Martinez' s friendly, outgoing personality and Dressel's warmth and ability to engage fully with patients.

Essential to her health, Martinez has the support of her children, brother, and partner as she undergoes hemodialysis treatment. Martinez is very thankful for the care she receives at VA, "Without these [hemodialysis dialysis] machines I wouldn't be here. I wouldn't be talking with you."

While life-sustaining, hemodialysis is not a convenient treatment because it requires several multiple-hour visits to the hospital every week, and you cannot miss treatments. If a transplant is possible, it offers more independence but with life-long follow up care. Martinez's 50 year-old son is in the process of being evaluated to see if he is an eligible candidate to donate one of his kidneys to his mother.

Martinez knows she has a strong support network consisting of family, friends, and VA hospital employees to assist her through this process. Martinez looks after herself as well. She stays active and keeps herself busy by going to the gym and volunteering when she can. She stays positive.

There are many factors that contribute to kidney disease and its advancement. Some of these factors are within our control, like lifestyle and diet, and some are not, like ethnicity or advanced age. Most people do not think much about their kidneys until something goes wrong. But, Dressel said "kidneys are incredible multitaskers."

She explained that kidneys are essential for maintaining a healthy equilibrium throughout the body by helping to control blood pressure, eliminating toxins from the body, and other important functions. Toxins are filtered out of the blood by the kidneys and expelled as urine. Hemodialysis is a treatment that performs the filtration process when the kidneys are unable to do so.

“Many people do not learn they have kidney disease until it is in the later stages because you usually don’t become symptomatic until you’ve lost around 50% of your kidney functioning," said Dressel. She says the best way to maintain kidney health, from a nutritional standpoint, is to keep diabetes under control, maintain a healthy weight, eat balanced meals, limit salt intake, and drink adequate amounts of water.